Like Kamikaze's gonna let Sorrow die that easily. Kamikaze has died before, gone to Hell, tamed Cerberus, and got the power to travel to and from Hell.
All created souls are bound to Hell, wether they want to or not.
This WILL be open if Sorrow dies or I die.

Also if Devilman dies he will appear here... but the hell will go to isn't the hell in eternal bastion but the hell from his dimension. 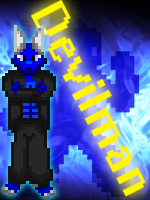 OOC: If ya wanna know what happens to your character Fullmetal, then come hether. BTW, I'm Death for this part of this shortcut back to life.)

...THAT is exactally how Sorrow feels)

*sorrow tried to stand, but his legs collapsed and he fell to the floor with a big crack*
Sorrow:"YEEEEAAAAAAAAAAAAAGGGGHHHHHHHHHHHHH!!!! I can't stay here...gotta get back to...the hideout...."

Death: Ah...no. Your dead. You ain't going nowhere.
Sorrow: What do you mean?
*A portal appears in front of Sorrow replaying an old saying from Sean*
Sorrow: Sean?
Please don't die Sorrow....created souls like us are bound to Hell. No matter if we want to or not
Death: Its as the coon said. Your here wether you want to or not.

*sorrow pounded his fist into the ground and lied back*
Sorrow:"so, how does this work?"

Death: Well, since I don't actually run this place, you'll have to stay here. But I'll give ya a tour.
Sorrow: ....Of what?
*Death walks off*
Sorrow: HEY!
Death: Now, three things to know:
1. That stone you had, gone.
2. Don't cross the river of lost souls. You'll become apart of that river.
3. This!
*Death swings his scythe and chops Sorrow's head clean off.
A day passes
*Sorrow wakes up startled*
Sorrow: Holy-.....what?
Death: Have a nice nap?
Sorrow: I get it. The place of eternal suffuring. No matter how many times I die, I'll come back.
Death: Bingo! Now....later!
*Death vanishes in a puff of smoke*
Death: Oh yeah, your alchemy works here. Find something to do to pass the time!

*sorrow stands up, wabbling*
Sorrow:"I can stand the dying, since I could die numerouse times.....but alchemy works here? If alchemy works here...then I just got my ticket out!"
*claps hands*
*sorrow summons the gate, and when it opens, it forces him back far away and vanishes instantly*
Sorrow:Damnit!

(OOC:AAHAHAHAHAAA! Not that kind!)
Death: Aahahahahahaha, not that kind of alchemy! No alchmist, not even those that can create life has kind of power to get out of here.
Sorrow: .....Damnit.
Death: Buuuuut, its seems that your young Hedgecoon can.
Sorrow: He can?!
(OOC: Sean has never told anyone about that, not even Sorrow)
Death: Yeah, but.....he...has to die.
Sorrow:

(OOC: From the allyways)
Death: Welcome back.
Sean: Yeah....what the...
*The glowing on his chest is still there*
Sean: Greeaat, I died with it so it stays with me after death.
Death: Looks like someone's waking up.
GK: !
Sean: Toldja I'd see ya in Hell, soo...hi!
GK: Hmhmhmhehehahaha! You fool! You've left everyone you care for just to get rid of me.
Sean: At least I'm not stuck here- *Summons his sycths* with me.
GK: ....Mo-ther-f***...
*Sean flies off*
Sean: Well, since he's down here forever, I'm going back.
*He holds his left hand in the air like its on a wall and a dark blood-red portal forms*
Sean: I'll be back. Hopefully not soon.

*Sorrow stands up*
Sorrow:that energy is Sean's.....I need to see him!
*Sorrow rushes towards the energy, but gets there too late and the portal had just closed, taking sean with it*
Sorrow:Damnit! DAMNIT DAMNIT DAMNIT!
*sorrow spots the gatekeeper*
GK:Oh! sorrow....um...I was...errrr....
*Sorrow smiled and claps his hands*
*A transmutation circle forms under him*
Sorrow:Now, I believe it's time to make your after-life hell!

The GK dissipates in a flash.
A dark cloud begins to form.
(OOC:Sorry but...)
Sorrow:"No! It can't be! Ino!?"
???:"You are mistakenly wrong..."
They both disappear.
(OOC:Try to take a guess on who that is. Leave the answer to yourself though. I'm planning a HUGE battle...)

(OOC:well, I gotta leave again...wont be back until around six o'clock P.M.(if you live on the east coast))

A day passes...
Death: Have a nice nap?
Sorrow: ......
Death: Yeah, same here. So, wanna do something?
Sorrow: ......
Death: Don't give me that look. I can't send you back, but the Devil himself can.....or....the light of revival...
Sorrow: Light of Revival?
Death: It seems that everytime your young Coon uses some sort of energy, a great pillar of holy light shines down beyond the gates of hell....Hm?
*A bright light pillar shines from the red sky*
Sorrow: There it is.
Death: This one feels strong. I'd say....5-7 minutes long-Hey, don't just rush to it!
Sorrow: I've got 5-7 mins, right? I have to run. *Runs off into the distance*
Death: Mortals. Hhmmm....I wonder how he's gonna get past Cerberus?

*Sorrow runs as fast as he can towards the pillar*
Sorrow:Yes!

Minute 4
*Cerberus spots Sorrow running to the gate*
Cerberus3: Hold it right there, mortal! No one crosses the gate!
Cerberus1: Unless you have buisness with the Devil himself.
Cerberus2: Or you DO want to pay for your past sins from your life?

(OOC: Uhh... he was just taken by ???. Bah, we could just say he was dropped off afterwards.)
???:"There shall be none of that, creten. He is now one of the Dark-Chosen. He shall not be harmed. Nor shall he escape this barren wasteland of unforgiven souls."
With the snap of its fingers, a dark sign appears over Sorrow's.
???:"As you can see. He is my pet. He shall do what I say, when I say it. If he rejects?..."
The sign begins to glow. Sorrow yells in pain.

Cerberus1: I see. It IS you. Your voice sounded familiar.
Cerberus3: Do what you want.
Cerberus2: Hmph.

(OOC:one flaw there, is that the devil himself decides the fate of everyone in his domain. there is no,
"he works for me" stuff. but i'll play along)
*Sorrow claps his hands*
"I was informed recently that my alchemy works here!"
*Sorrow creates a gigantic stone pillar that pokes one of ceberouse's(lol I spelt it wrong....) Eyes out*
Cerberouse head 1:AH! You'll pay for that mortal!
*Cerberouse tries to stomp on sorrow, but sorrow runs up his leg and claps his hands*
Sorrow:You've been torchering lost souls for far too long!
*Sorrow slams his hands on cerberous's knee, and everything on his leg from there down blows of*
Cerberouse head 3:DAMNIT! Die!
*Cerberouse head two tries to bite Sorrow, but he jumps onto it's nose as it bite the open wound on accedent*
Cerberouse head 1:F*** YOU!
*Cerberouse howl menacingly and balls of pure dark-energy fly at sorrow*
Sorrow:S***!
*Sorrow backflips off of cerberous and gaurds his face with his arms*
*as soon as the energy is about to hit him, the sign above his head glows and repells the energy back at the beast*
Cergerouse head 2:AAAGGHH!
*the cerberous falls to the ground*
Sorrow:damn, only two minutes left...
???:nice work, but you won't be pulling a stunt like that again!
Sorrow:your right I won't.
*Sorrow claps his hands and grabs a passing-by soul*
???:AND NO MORE ALCHEMY!
*the sign burns sorrow again, which makes him let go of the soul, the soul then flies through the pillar of light and out of hell....*
*Sorrow falls, his body cold, hard, and lifeless*

OOC:sorrow's old body will NOT respond to ANYTHING, will not talk, will not move, will not eat, will not live.....it'll evaporate in about three posts >=)

(OOC: I'll be the judge of that.)
The Devil: ....If your that intent on revival-
*Puts his hands on Sorrow and Sorrow grows torn bat wings that can lift him up and small stubby horns*
The Devil: Then I've got a mission for you.
Minute 1
The Devil: Kill the person running one of X.A.N.A.'s HQs. You are a created soul, that person is making more damned souls. Kill him...and you won't come here when that stone fails you.
30 seconds
*The Devil picks Sorrow up*
The Devil: Three things to tell you:
1. Kill that soul that escaped. It'll have crimson red skin.
2. Your not restricted on alchemy anymore.
And 3: I rule you now.*Throws him and Sorrow is lifted into the pillar*

*the body flies away, through the pillar of light at the last second*
(OOC:sorrow did not resurrect himself, he transferred his stone into the soul)

(OOC: No, it's not the devil. Although I refuse to tell. For you'll know sooner or later...)

Ino:"*Sadistic laugh* Is that it!?"
*The mark on Ino dissipates. Ino forms back into his original self.*
Ino:"That fool demon doesn't understand! I have the power of dark and light combined. NOTHING CAN STOP ME!!!"
Devil:"I can say otherwise..."
Ino:"HA! You really think YOU can stop ME!? *Sadistic laugh* I'll make this quick."
*Darkness forms around the devil. In that moment, Ino dissapears. The devil feels a tingling feeling, then explodes. Ino stand where he stood.*
Ino:"*Sadistic chuckle*Nothing... can stop me..."
*He teleports back to the gate.*